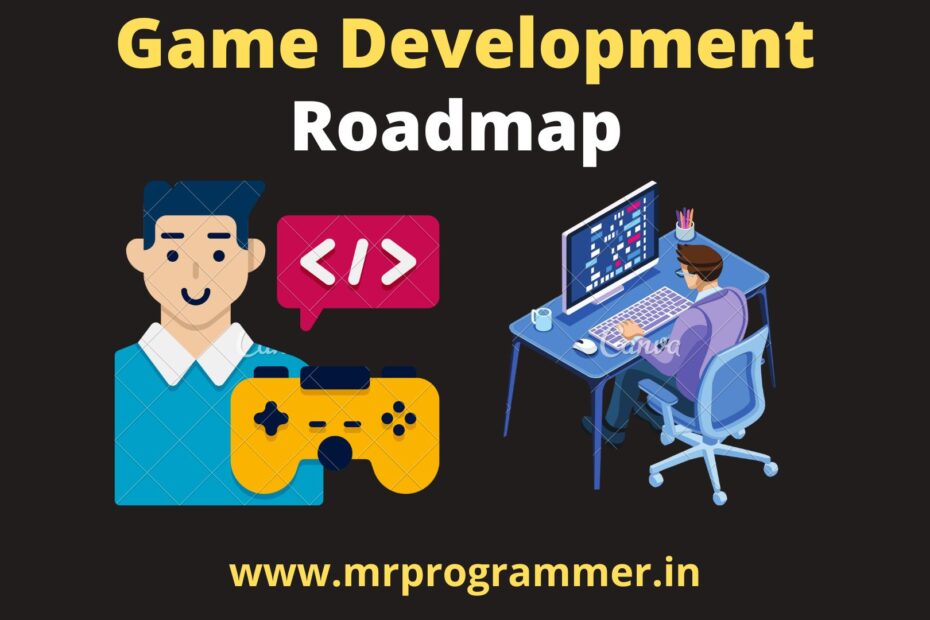 If you like Play Games Like Me, And You want to Build Your Own Games By Learning Programming And Game Engines. Then This Blog Post is For You Because I will Give the Complete Game Development Roadmap, I will Tell you All the Things you Need to Learn About Game Development.

What is Game Development?

Game development is the art of creating games and describes the design, development and release of games. This includes concepting, designing, building, testing and releasing. When creating a game, it’s important to think about game mechanics, rewards, player engagement, and level design.

What is Game Design?

Game design is the art of designing games. It includes everything from the initial concept to the final product. A game designer may work alone or in teams, depending on how big the project is. Game designers have different roles and responsibilities, including storyboarding, level design, programming, art direction, and testing.

How to Start with Game Development?

In Order to Learn Game Development You Need to Learn the Following Things:

Unity is a cross platform game engine developed by Unity Technologies. It is free and open source software that is designed to make developing 2D games easier. Unity’s graphical user interface (GUI) is based around a scene graph, where each node represents a visual object in the scene. Nodes have attributes such as position, rotation, scale, and color. When the player performs certain actions, scripts attached to these nodes call methods defined in components. These components define various behaviors, including movement, collision detection, and physics.

Java is a computer programming language that is commonly used for writing server applications. It is also used for client applications, mobile apps, desktop apps, embedded systems, and video games. Java is often used alongside HTML, CSS, JavaScript, and XML.

If you want to Become Successful in the Journey of Game Development Then Follow the Tips:

Programming languages are the tools you use to create software applications. There are many different programming languages out there, each with their own strengths and weaknesses. You need to learn at least one language well enough to understand how it works and what its limitations are. As Mentioned Above You Need to Learn 3 Things Unity, C++, Java to Develop At Least Basic Games.

Designing skills are necessary to create a game’s look and feel. A designer creates the visual aspects of the game, including graphics, sounds, animations, and user interfaces.

Artistic skills are necessary to create unique art assets for games. Artists create everything from character models to backgrounds to props to weapons.

Business management skills are necessary to run a business. Managers oversee the financial side of a company, while executives lead teams of employees.

What does a Game Developer Do?

A game developer designs video games. A game designer creates a concept for a game, then writes code to make it happen. He or she may work closely with artists and programmers to create a fun experience for players.

Once a game design is complete, a game developer works with programmers to turn the idea into reality. Developers use programming languages like C++, Java, and Unity to create the game’s logic and gameplay.

After the game is finished, a game tester tests the game to ensure it runs smoothly. If something isn’t working properly, he or she finds out what went wrong and fixes it.

When a game is ready to go live, a game publisher makes sure it’s safe for players and looks good online. He or she may add special features or change the price.

How Long Does It Take to Become a Game Developer?

1. You have to start somewhere

The first step to becoming a game developer is to learn how to program. There are many ways to do this, including learning programming languages like C++, Java, Python, etc. If you want to become a game developer, then you should know at least one language.

2. Learn about the industry

Once you know what kind of games people are playing, you can get experience making games. Try to find a company that makes games and work for them.

If you don’t have any experience, you may not be able to find a job. To find a job, try looking online. Many companies post jobs on their websites.

As we Hear this Phase from our Childhood That “Practise Makes a Man Perfect”, So if you Will Improve Your Programing Skills & Using the Tools Efficiently. Then I am Sure you will be Become a Successful Game Developer.

Where Can I Find Jobs as a Game Developer?

Unity Technologies is a game engine company that provides tools for making 2D/3D games. Their products include the Unity Editor, Player, Pro, Mobile, and Cloud services. The company was founded in 2006 by David Helgason and Michael Booth. In 2010, Unity became a subsidiary of parent company Unity Technologies Holdings Limited.

Valve Corporation is an American video game developer and publisher headquartered in Bellevue, Washington. Founded in 1996, the company focuses on developing and publishing video games using the Source game engine.

So This Was it For this Blog, See you in the Next one Till Then Keep Coding Keep Exploring!