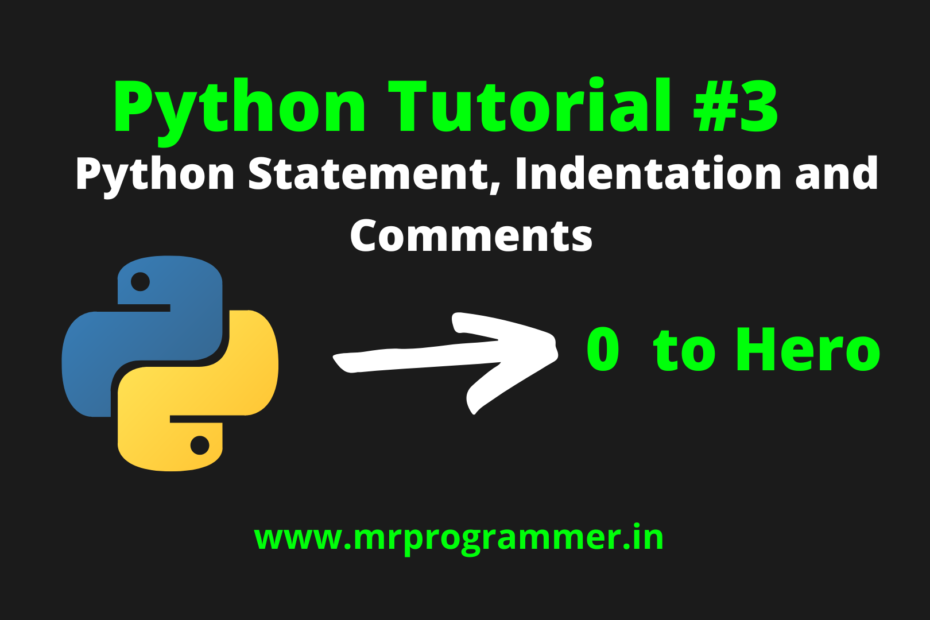 In this Tutorial we will be learning about Statements, Indentation & Comments In Python, So if you Have Not Read the Previous Parts of this Course You can Access them Here:

Statements that the Python interpreter can execute are called statements. For Example a = 6 where there is value assigned to a variable. There are Statements In Python Like if statement, for statement & while statement.

In Python, the end of a statement is marked with a newline character. However, you can use the line continuation character () to span statements across multiple lines. for example:

This is explicit line continuation. In Python, line continuation is implied within brackets ( ), square brackets [ ], and braces { }. For example, the multiline statement above could be implemented as follows:

Here, the surrounding parentheses ( ) implicitly take over line continuation. The same goes for [ ] and { }. for example:

Here, we can also go for this:

Most programming languages ​​such as C, C++, and Java use curly braces { } to define blocks of code. However, Python uses indentation. Blocks of code (function bodies, loops, etc.) start with an indent and end with the first non-indented line. The amount of indentation is up to you, but must be consistent throughout the block. In general, 4 spaces are used for indentation, tabs are recommended. Here is an example.

To Avoid Python Indentation, you must Know how to write a clean code in python, it is a Good practise For a Python Developer. So You can Copy the Following Method to write a Clean Code:

Comments in Python are used to Describe your Code, And Writing Comments in Python is a Good Practise. It extends up to the newline character. Comments are for programmers to better understand a program. Python Interpreter ignores comments.

It is Represented By the Symbol ‘#‘ Example:

As Comments, We also Use Docstrings In Python, to Describe our Code, It is a Short-Documentation About Code. We can add Docstrings in Our Code Using Triple Quotes. For Example: