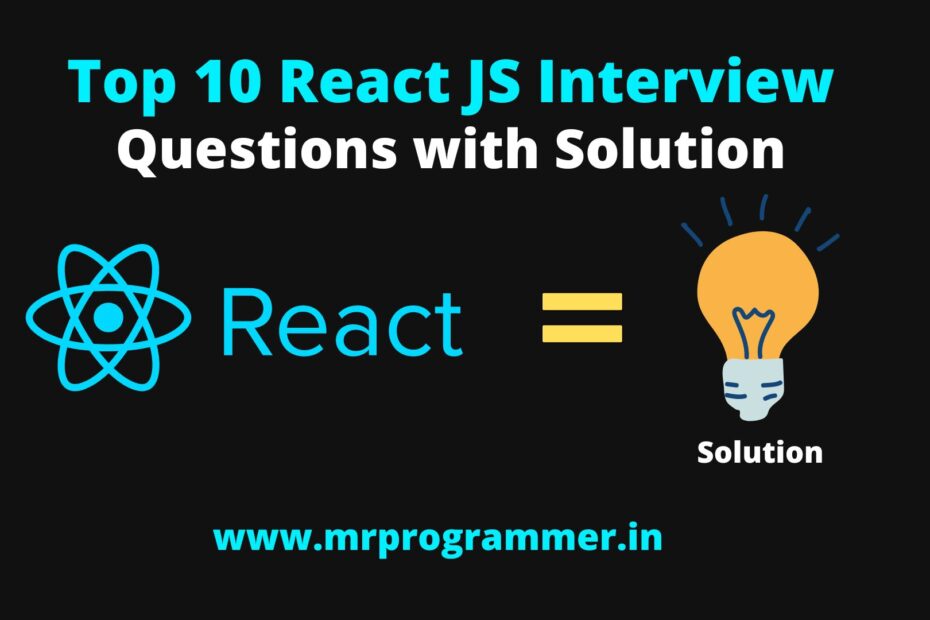 Hey Developers, In this Post we you will Top 10 React JS Questions, If you are a React Developer or Learning React Js for Development then you should Know these React Questions. And In this post I will be Also Answering all the Questions.

React is a free and open source front-end JavaScript library for building user interfaces based on UI components. It is maintained by Meta and a community of individual and corporate developers.

JSX is a syntax extension of JavaScript It is used with React to describe what the user interface should look like. It Looks Similar to a HTML Code.

No Web Browsers Cannot Read JSX Directly Because JSX is not Regular JavaScript Component And They Only Read Regular Objects.

In Order to Render the JSX File Directly from the Browser Then It should be converted To Regular JavaScript Object. For this We Use Babel.

3. What is the virtual DOM?

DOM Stands for Document Object Model, The DOM shows an HTML Document with a Logical Tree Structure. And Each Tree Ends in a Node, and each Node contains objects. React keeps a lightweight representation of the real DOM in memory, called the virtual DOM. When the state of an object changes, the virtual DOM only modifies that object in the real DOM, rather than updating all objects.

To Create a React App:

Step 1: Download & Install Node JS On your Computer, We are Installing This Because npm (Node Package Manager) to Install React Library.

Step 2: After you Have Installed Node Js In your Computer Then, Run create-react-app package to Create a New React React App.

Step 3: Install Any Code Editor Like Vs Code And Start run npm start to run your react app.

5. What are Components in React?

6. How do you create an event in React?

To Create Events In react, Write the Following Code:

7. How do you write comments in React?

We can Write Comments In React By Using the double forward-slash // or the asterisk format /* */.

8. How is React JS different from Angular JS?

The Following are the Major Differences Between React JS & Angular JS:

render() Function is Required For Each Component. This returns HTML Code which is display in the component

If you want to render more than one element, all of the elements must be inside one parent tag like <div>, <form>.

A state is a built-in React Object that is used to store data or information about any component. The state Component can be Changed if required and then it re-renders it.