Home » Which Programming Language Should You Learn First? | Beginner’s Edition

Which Programming Language Should You Learn First? | Beginner’s Edition 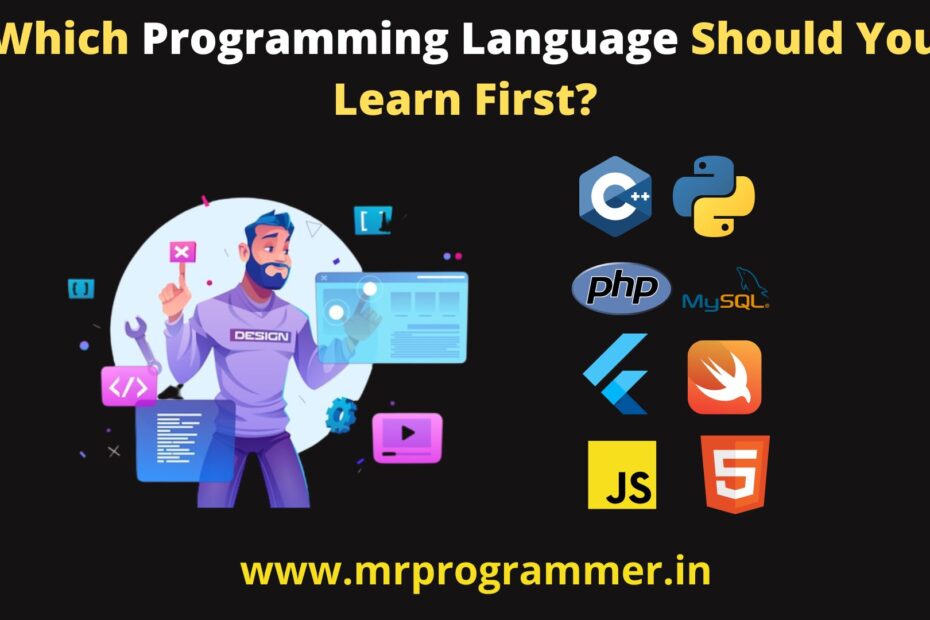 When I was a Beginner I was also Confused which language to choose from Or Where to Start my Programming Journey. Don’t Worry Because you have Landed the Correct Place and Today I will Tell you Programming Language to Start First.

What are Programming Languages?

A programming language is a type of computer language, used to implement algorithms in computer programming.

There are Many Programming Languages In the Market, But there are Some Specific Languages that are highly in demand in 2022 and Will be Demanded in the Future Also. So Some of the

Most Popular Programming Languages are:

JavaScript is a dynamic, weakly typed, prototype-based, object-oriented scripting language. It is built into web browsers and is widely used for front-end web development. It is the de facto standard scripting language for HTML documents and is included in many server-side technologies. JavaScript is derived from ECMAScript, defined by the organization Ecma International.

Java is a general-purpose computer programming language specifically designed to have as few implementation dependencies as possible. Java is generally regarded as a strongly typed, class-based, object-oriented programming language. It is commonly used in server-side scripts and client applications. Java was developed by James Gosling at Sun Microsystems and later acquired by Oracle Corporation.

Python is a high-level programming language that was developed in 1991 by Guido van Rossum at CWI (Centrum voor Wiskunde en Informatica) in Amsterdam, Netherlands. Python is free software released under the terms of the GNU General Public License. In addition to being open source, Python is designed to make writing reliable, clear code fast, while maintaining readability. Python supports many different programming paradigms including imperative, object oriented, functional, and meta-programming.

PHP stands for (Perssonal Home Page) it’s far a freely distributable, open-source, general-reason scripting language in general meant as an utility improvement framework. PHP is exceptional for its extraordinarily easy syntax and its cross-platform compatibility. PHP is particularly appropriate for Web improvement and may be embedded into different Web content.

Go is a statically typed, compiled programming language advanced with the aid of using Robert Griesemer, Rob Pike, and Ken Thompson at Google. The syntax is just like C, however with CSP-fashion reminiscence safety, rubbish collection, structural typing, and concurrency.

R is a statistical computing language and environment. It affords state-of-the-art information evaluation talents the usage of a extensive kind of statistical models. R is loose software program disbursed below GPL model 2 or later. R is maintained through the R Development Core Team on the University of Auckland, New Zealand.

Swift is a general-purpose, multi-paradigm, compiled programming language advanced with the aid of using Apple Inc. and the open supply community.

Rust is a multi-paradigm well-known programming language. Rust emphasizes performance, kind safety, and concurrency. Rust enforces reminiscence safety. This approach that each one references factor to legitimate reminiscence. It doesn`t require the usage of a rubbish collector or the reference counting observed in different reminiscence-secure languages.

Flutter is an open-supply UI software program improvement package created with the aid of using Google. It is used to broaden move platform packages for Android, iOS, Linux, macOS, Windows, Google Fuchsia, and the internet from a unmarried codebase. First defined in 2015, Flutter became launched in May 2017.

Which Programming Language To Learn First

If you are a Beginner, And Just Want to Learn Programming Fun Then You can Start with Python And you want to Create Websites and Develop Web Apps Then You should Go For HTML & CSS or JavaScript.

After Learning Python, And You have Cleared All the Basic Concepts & Fundamentals of Programming then You can Go for Learning C Sharp Or C.

Best Programming Language Choice For You

The Best Programming Languages Totally Depend on your Work Flow, How you want your skills to get enhanced so I will tell you The Fields That are Most Popular & You can Choose From Them And Master them.

As I Said Above, If you are Very New To Programming & Don’t Know Anything About it Then You Should First Go With Python Then Choose On which Field You want to Work On And Then Finally Enhance Your Skills By Mastering In Any Language. So this Was It For this Blog See you In the Next One Till Then Keep Coding Keep Exploring!

1 thought on “Which Programming Language Should You Learn First? | Beginner’s Edition”